A forum for general discussion of the game: Open to all punters
Post Reply
27 posts

And why would it be such a bother for you if it was released for the iphone èh?
Why would that make the game less enjoyable?
Top

Meo wrote:And why would it be such a bother for you if it was released for the iphone èh?
Why would that make the game less enjoyable?

Because the devs are already busy, and the concessions they would have to make are ones they are not willing to make.

I said this on LSF, but let me recap here: The iPhone platform itself is perfectly capable of hosting games like the ones made with Ren'Py. We've already seen an abandoned VN made by an LSF poster that proves this. But those apps work precisely because they play to the platform's own strengths instead of importing everyone else's all-purpose frameworks and libraries.
Top

Forget the port, then, what about silly little apps like KS equivalents of the Strike Witches game where you use the touch screen to move Yoshika's legs?*


*This statement is 95% trolling.
This one needs to lurk moar. This one lurks too much! Ahh, this one lurks juuuuust enuf.
Katawa Haha: Disability Mothers
From Shizune's Perspective: a fanfic
Top 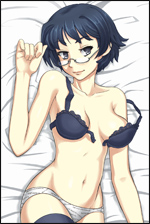 I'll be honest with you guys the Devs were trying to keep the iPhone version of KS a secret, however after a long and drawn out talk about I've managed to convince them to let me post a screen shot or two to show you guys what to expect. Most likely this will get released on Cydia, however it may wind up on Rock, yes this does mean you'll need a jail broken iPhone.

Above is a Rin scene, that we all know pretty well, you'll have to excuse the poor picture quality my camera wouldn't let me get the text in focus.

There is a Miisha and Shizune scene.

As you guys can tell the black borders on either side are due to the fact currently the iPhone team are working with BGs from the main game rather than resizing and proportioning them for the iPhone mainly as they're trying to work out how to stop the horrid lag the game gets from the low levels of ram and the tiny processor.

You may get more shots as time goes on but I somewhat doubt it till the full game is released.
Top

lol
It's a good thing Shizune is deaf, she is the only one who can stand (not) hearing "Wahaha~!" over and over.
Top

Who am I kidding Geno, by iPhone team, I mean extremely bored coder who offered to do it, it just sounds grander when I say team.

Well when I say extemely bored coder, I mean infinite monkeys with infinite type writers, I mean one is going to hit the perfect code for it right?
Top

Oh well i guess the thought was nice...
I'd totally jailbreak my phone for that if it were true

Hey man, fuck the app store, do it for teh Droid
<!Aura-> I did a line of powdered fig dust mixed with high grade blow from the ass of a supermodel wearing a Misha kigurumi at the party yesterday

toast wrote:Hey man, fuck the app store, do it for teh Droid

Is Ren'Py ported to ARM already? I've got a friend who's raving about his Pandora, and talking about finally catching up on on the gaming and VN's that he's missed. I might get him to finally check out KS this way.
静音是买外夫
Top

Warwick wrote:raving about his Pandora

Pandora website wrote:Since the Pandora is a project started by only a few people (and it isn't even out yet), you can't buy it at any online stores!