Ok, I've suggested this casually before somewhat, and was met with ignorance. I will prevail however, and suggest here. Also, first post!

Ok, so on their own it's ok, but together it just seems like there's not enough variety there. Plus the fact that it's completely unrealistic. Japanese people with blonde hair, green/blue eyes? Surprisingly enough we have NO ONE who even really looks Japanese except Shizune, who has the black hair. I mean, no one even has black/grey/brown eyes which are the most common colours, and can look so very striking and beautiful.

So my suggestion is this:
Shizune: Leave as
Lily: Leave as
Emi: Lightish brown hair/dark brown or medium brown eyes (It makes for a cute, homely, 'girl next door' look I think, and this way she looks less like a foreigner, which Emi is NOT supposed to be I believe? Two blondes are too much, and green is supposed to be a fairly RARE eye colour.)
Rin: Leave as
Hanako: Leave as (although I think black or grey eyes would be far more striking and contrasting than the purple/purple)
Misha: What's up with the yellow eyes? Originally I designed her with brown, but I dunno why the yellow now....

Well, I expect to get a negative reaction to this, but I'm just putting this suggestion out there anyway. Honestly, I think the colours of the girls aren't really thought out entirely, and mostly based off that coloured original image (which was NOT coloured by the original artist BTW).

Ever see a Japanese girl with pink hair? Or blue? Or neon green?
Top 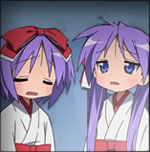 I was hoping to revert most of the colors back to the original:

*thanks Zoids, for the image

There was some resistance to having Shizune's hair the light teal it is in the illustration, but I think it'd be neat..

Also, I think it would be best to stay away from being intentionally politically correct.
Japanese people do mostly have straight black hair and brown eyes naturally, but they also have small eyes, notoriously crooked teeth, unimpressive bodies (compared to a good looking white person, anyway), and they all speak Japanese. Characters should be able to have hair colors and eye colors unrelated to their race.
Top

lol i wonder what dye is. Misha is about the only one with truly 'unnatural' coloured hair, and seems the most like to dye. Hanako's dark purple is like an exaggerated, anime extension of black (like dark blue-haired characters), and everything else is pretty much a natural colour if not exaggerated some. So hair can really get away with more.... but eyes?

Skim: I think reverting would be great in some cases... like with Emi's hair to that brownish blonde colour. Shizune's hair should definitely stick to the black or a dark blue-black though... That light blue is awful. Oh and... some of the eye colours can't really be seen in that anyway! Yea, I'd suggest more variety with the eye colours than the blue x 3 and green x 2.
Top

The original was uncoloured.

The colouring you see there was done by Anon, quite possibly one of the anons that "started" this project.

Emi and Lilly, in my mind *are* blone; Lilly is a platnium blode whereas Emi is more of your strawberry blond. I guess that means shading her a bit darker than Lilly.

Shizune's hair... well... I was never really addicted to either the green or the black. I think the green/teal makes for a nice contrast to the rest, and I'm not 100% sure on who led the charge to change it.

As for realism, that's never really been an issue. Instead of "realisim" in the sense of real humans, try to think "realism" as compared to similar things in similar genres; none of the hair colours that we've used have been outside of the "anime" sphere of hair colour, as odd as that may be.

Should we decide to head down the more realistic path, I would say that Shizune's hair would stay black, Emi's eyes would go brown and Hanako would get deep blue hair with steel eyes.

What might be the best idea would be to colour any of the sketches that you have access to and post them here so we can A/B them.

However, since we have to start sprite creation, I would hope that this discussion is resolved by thursday's deadline.
My Novel - Now available The Zemlya Conspiracy
Blog: http://cplcrud.WordPress.com

WHAT IS DONE; IS DONE. PLEASE MOVE FORWARD! Going back over the same things many times gets us nowhere. I have half a mind to lock this for being counter-productive. As Art Director I've locked in the colours. Unless Skim is terribly dissatisfied with the colours, I think they should stand. That is all.

Well.. if Shizune's hair was black...
I think it would also have to become longer so that she doesn't look like a boy.
At least with the sky blue hair she's unmistakenly a girl.
I would like to suggest making her hair a lighter color than darker.
Top

What about a navy or royal blue for Shizu's hair?
<@Delta_Kurshiva> I'm tiny~

Ok, I flat coloured Shizune's character sheet with a couple of different hair colours. I still believe there are a couple of things that can use some working on with the main cast and their colours, and we should be open to change and not just "It was already decided! No more change!!" Sometimes there's an option out there that no one has pursued and if only you experimented a little you would find it looks great! Let's try to be open minded about change, and not set in what we already have. Lightish browny colour (could use some more tweaking and experimentation, but is rather nice and different):

Another take on color changes:

Sorry for the dead highlights in the non-teal colors;; I didn't feel like manually redoing them.
Last edited by skim on Sun Sep 30, 2007 3:59 am, edited 2 times in total.
Top

I think the black looks the best.

The blue (like in skim's sketch above) is just as fine as black for Shizu's hair but bringing realism as an argument to this is not going to do anything else than getting a few catgirls killed. Also, frump said it pretty well.
<Aura> would you squeeze a warm PVC bottle between your thighs and call it "manaka-chan"
<Suriko> I would do it if it wouldn't be so hard to explain to my parents
Top

Frunp; since we're changing artists and basically starting the art again, I think it's a good a time as any to make changes if people are dissatisfied.

As for the colours, I think if we go with the black, then the hair needs to be lengthened. It looks fairly boyish. Otherwise, the dark blue looks fine.

Yes it's fine if the artist who's doing the work is dissatisfied or if everyone was seriously offended. It's not fine if just anyone walks in and says, "I'd like this changed plox".

Until this topic was started, I had the impression that Skim was fine with the Black and I was going to let her do Turquoise if she so insisted. I had also heard no opposition from others about the Black. Even in this thread I haven't really seen any large opposition to how things were. Now there's all this. Trying to please everyone again. I keep fooling myself into thinking that I actually get to make decisions around here without consulting the chorus.

As for the length, I don't think it needs changing at all with the Black, Blue or Teal; but for sure all the shades of brown seem to make it looks boyish.
Top

---We will continue to walk down this path until eternity.
Top
Post Reply
26 posts