Of course everyone adequately familiar with Katawa Shoujo has heard the question "Will there be a Misha Path" probably a thousand times and if they've heard that they've heard the strict, non-reconsiderable answer "no", but one question regarding that which I have never heard is how come a Misha path isn't available to us. Misha's peppy personality would make a very popular canidate for a romantic partner yet for some strange reason she isn't one. Why? My most current theory (to some it would seem the least likely theory) is that Misha is supposed to be another man's partner; Or more specifically I believe that Kenji could actually be that partner. The piece of evidence of this could be possible is read in the "Kenji" path where Kenji actually states that he has a girlfriend, but doesn't mention who. Since the girl is not mentioned it is clearly evident that she is either not important or they want to surprise us later on with who it is. I believe the biggest surprise and an incredibly interesting developement of all would be that Kenji hooked up with Misha. The next, and last piece of evidence I saw was that Misha seems to be the only one of the girls (besides Lilly who would obviously know someone who is in her class) that actually seemingly aknowledges Kenji's existence (Please correct me if i'm wrong) and the only woman who mentions Kenjis paranoia problem (how does she know about it?)
Misha: "You don't want to become one of those people who just stays in their dorm room all day, being paranoid, do you?"
Kenji: I find myself staring over her shoulder at the door to Kenji's room right across from mine. I hope he didn't hear that, but I think Misha wants the opposite.
My other more bland theories include, Well they're doing a hell of a lot right now for no freaking reason other than our enjoyment, so they might not want anymore work added on. Well the only reason I don't fully believe in this theory is because I believe that most of the 4leaf studio members seem to have a perfectionist mentality even if they do want the project finished as quickly as possible, meaning that they would willingly do the extra portion. Another theory is that they just couldn't find another writer, but since I'm sure that their are probably writers with the skill level to write up to 4leaf's expectations that would gladly work with them even if they are few and far apart that becomes less of a reason. Maybe Misha's sole purpose in the Visual Novel is to interpret for her deaf friend, but they could have just as easily made Shizune a lip reader making Misha just as necessary as Lilly's now nonexistant seeing eye dog, so this proves that Misha has some other reason to exist whether that reason being to emphasise Shizunes deafness to just our pure enjoyment to being the source of a futer scandalous revelation (Kenji Theory!!!). Maybe Misha is just a manwoman, probably not something considered to be very bland, but I put it here because it's about as likely as batman and robin being homosexual lovers..... or actually... hopefully a little less likely than that. Well I think i've done quite enough talking and the reason I posted this in the first place is to get others oppionions on the subject. Well what do you think? Is the Kenji theory just the product of an overactive imagination? are any of my other theories plausible? If you're a 4leaf studio representive I definetly would like your input most of all so if it's all just a silly rumour please disband it ASAP because I really hate Kenji
Top

Hmmm... There are a few flaws with your idea about Misha and Haiso being secretly going out. First of all, if they were to do that, then the whole entire beginning would have to be rewritten. The fateful heart attack would either had to have already happened, or an accident with the both of them would have to occur which explains why they're in the school in the first place. I believe that 4 Leaf Studios is going to take what the audience wants into consideration and add Misha in, but just throw her into Shizune's story line (since, as Haiso says in the game, "they're inseparable"). In my opinion, if they were to put Misha in as an actual candidate, then they should just add in an extended version at the end of the game (like as in The Sagara Family) which just involves Misha and Shizune... It would be less work for them (for the most part) and everyone would be happy about having Misha in as an additional character. Of course, you could either decide to Just go with Misha, or have both Misha and Shizune all for yourself.

The extended version doesn't have to be ridiculously long either... It could first start out with you walking alone with Misha and she just starts talking about things (in a serious way) that she's never even told Shizune about. Things like: why she goes to the school in the first place, or her "dark secrete". Something like that. Then she can also confess her love to Haiso (in a very innocent, pleading way). This could make an interesting twist because she could say how Shizune loves Haiso as well. Then a question could pop up that says "Answer to Misha's feelings" or "leave me time to think" (which would lead to getting both Shizune and Mish at the same time). (Personally I think all of you just want Misha added into the story so you can witness some hot, rough, and VERY LOUD action. I'm on to you...)

Xaphan wrote: (Personally I think all of you just want Misha added into the story so you can witness some hot, rough, and VERY LOUD action. I'm on to you...)

As much as i dislike the union of kenji and Misha. A girl like misha would be just the type to bring Kenji around. However, his first sex experience was rather traumatic, if i remember correctly. As such, someone as loud as misha may simply frighten him more.


Aura wrote:Misha is a main character, just as much the five girls who have paths are. She has more dialogue lines than any other non-Hisao character in Act 1 and she is an important figure in the game. However she doesn't have a path, because she was not in RAITA's picture and we don't want to bloat this gigantic project any more than it already has been. We actually (not too seriously) considered dropping one of the other routes to reduce the size of the game before.

That's the simple explanation as to why we can't date her. but nothing about someone else. Misha's fate will ultimately remain a mystery. This Kenji theory is interesting, I too thought of it, but dismissed the thought quickly, because i didn't want it to happen. 見ぬが花

Xaphan wrote: (Personally I think all of you just want Misha added into the story so you can witness some hot, rough, and VERY LOUD action. I'm on to you...)

Guilty as charged, your honor.

More to the point of the topic - I'm not very convinced by the Kenji-Misha theory, but to be honest it's impossible to tell if Misha and Kenji would have hit it off before he went nuts, as we only get a tiny glimpse of what he was like before then. I personally think Yuuko-Kenji would be more likely, but I'm going mostly on intuition on that - it just seems more likely that the Harry Potter knockoff would be paired off with the apologetic, clumsy meganekko than the hyperactive nutcase. (Horribly generalizing, I know, just trying to make the point).
Last edited by Falkentyne on Wed May 27, 2009 12:39 am, edited 1 time in total.
Top

Though sure the makers say no, but there may be changes, one can never tell and I'm still holding onto hope. There'll be months, perhaps years till the final product, things can change, or maybe as a branch from Shizune's line, you can begin to alienate one of them in favor of the other.

Meh, I don't see this whole Kenji/Misha thing though, but then again, I have other theories.
Top

There are no needs for crackpot theories on the issue of Misha path. If we wanted to make one, we could.

But we don't want to.
<Aura> would you squeeze a warm PVC bottle between your thighs and call it "manaka-chan"
<Suriko> I would do it if it wouldn't be so hard to explain to my parents
Top 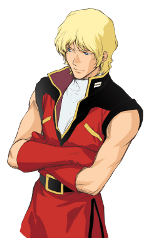 Posting for the lulz

"We all suffer from the preoccupation that there exists... in the loved one, perfection."
Top

Aura wrote:There are no needs for crackpot theories on the issue of Misha path. If we wanted to make one, we could.
But we don't want to.

T_T
I may be getting out of my limits but, supposing that KS does come out some time, would you consider adding a Misha route as an expansion, be it written by a staff member or a new guy?
Siiiiigh....
Top

Dude, it's already a ton of work for what they have so far. Chill out and read some fanfics, there isn't going to be a Misha path.

Suggesting the KS devs include a Misha path is like asking for a new WoW class from Blizzard, except Blizzard is a legit company that sits atop a mountain of human time and money while KS has been developed in the free time of a handful of people. Also the fact that nobody is paying anything for KS kind of makes it a dick move to ask for something the devs decided not to include.
Top

Maah, well that is true. I could always try my hand at some fan fiction if I'm capable of getting my lazy ass to finish the work I already said I'd finish.
Good luck to the devs, anyways.
Siiiiigh....
Top

lulz @ the dialog box (even though I don't get the reference if there's one).

Well, doujinshi aren't that fun when you need to draw them by yourself ;P
And you need to have leet drawing skills to boot.

And... you don't want to? You hurt our feelings (even thought i think I like Ririi the most so far)

Jaen-ni-rin wrote:lulz @ the dialog box (even though I don't get the reference if there's one).

http://transitfunding.ytmnd.com/
"We all suffer from the preoccupation that there exists... in the loved one, perfection."
Top

Aura wrote:There are no needs for crackpot theories on the issue of Misha path. If we wanted to make one, we could.

But we don't want to.

Yes!!!!!!
As I hinted to earlier it wasn't a theory I believed in particularly alot (I still think it would be a kind of interesting and believable concept), but instead A theory I wanted disproved.
The theory I believed in the most seems to be the correct one anyway(too much work I think), so if anyone wants to else cares about the answer Aura said it right here so there is no need for further posts.
Top

Naw, it's rather a "we hate that annoying bitch and her annoying supporters too" theory