Misha has Hinamizawa Syndrome. Her jealousy over not receiving a gift from Hisao is going to trigger a descent into stabby-stabby madness by about the third act

Get chance and luck
Top

I don't agree that it's anaemia, Hiems. It's much more than just dizziness - anaemics tend to be physically weak, or at least easily fatigued, because their blood can't carry as much oxygen as healthy people - the association with weakness has even entered the wider lexicon ("her anaemic rendition of the piece failed to inspire me", for instance). That's obviously not the case with the vivacious and gregarious Misha.

Just to cast another vote in the matter, I'm putting my money behind a brain tumour, or at least some form of mental disorder. The specific attention drawn to Misha's difficulty with certain words, even though she seems perfectly articulate in other respects (with her rapid-fire signing and so forth), indicates that there's something particular happening in her head. Perhaps she's so relentlessly loud and outgoing as a coping mechanism - the tumour is fatal and the Academy is as much a hospice for her as it is a school, so she wants to be as part of the world as much as possible before it claims her...
There was a young clerk who took exception to Curzon's memorandum. He thought it was balls. But he was afraid to say so directly, so he scratched faintly in the margin, 'Round Objects'. Lord Curzon replied in a note: "Who is Mr. Round, and why does he object?"
-Sir Alan Lascelles
Top

Misha has problems translating complicated/unfamiliar words from sign language, not necessarily using them herself.
Beisdes if having problems with complicated words constituted a disability, half the population would have to be institutionalized...
Emi > Misha > Hanako > Lilly > Rin > Shizune 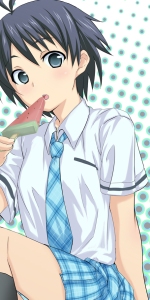 kapparomeo wrote:I don't agree that it's anaemia, Hiems. It's much more than just dizziness - anaemics tend to be physically weak, or at least easily fatigued, because their blood can't carry as much oxygen as healthy people - the association with weakness has even entered the wider lexicon ("her anaemic rendition of the piece failed to inspire me", for instance). That's obviously not the case with the vivacious and gregarious Misha.

Really? My friend has athsma too, so I just sorta thought that she was weak because of that. She's pretty good at sport and gym class, though.

I don't know what it could be, then, but a brain tumour would make sense.

Not sure if this has already been said because I'm far too lazy to read through all of these pages, but I was always under the impression that Misha suffered from ADD, or a possible mix of ADD and OCD. There weren't many hints to the latter, (or the former for that matter, I suppose it's stereotypical to think that all ADD people are so eccentric) except for one in particular that stuck out to me, when Hisao was speaking to Shizune, and waiting for Misha to translate, he looked over and found her fining down her eraser to try and get it to a perfectly flat. I immediately thought of OCD, but who really knows?

I believe it would be more interesting (albeit predictable) for her to have some sort of mental disability though.

Merlyn_LeRoy wrote:If so, I'd like her to lapse back into Kansai-speak when she gets hot & heavy with Hisao...

It's just that Yamaku is not supposed to be a school fpr people with mental disabilities...
Emi > Misha > Hanako > Lilly > Rin > Shizune

Mirage_GSM wrote:It's just that Yamaku is not supposed to be a school for people with mental disabilities...

Correct, that's what Saint Pfil's Specialty Academy is for. But people with mental disabilities can still attend, normal people are, just got to fork the bill.
Rin=Hanako>Emi>Misha>Lilly>Shizune (Misha counts in my world alright; and now she surpassed Lilly)
Fanfic series entitled... A Day in the Life of [character name here] (updated 6/8/10)
Random writings and Crossover... New stuff of Neuman (updated 5/6/11)
It's time to Duel... KS Yugioh Deck (updated 3/16/11)
Top

I must admit I gave up on reading the entire thread about halfway through - it is half past five in the morning - but I decided to throw a couple pennies in anyway.

Asperger's syndrome could fit - I found myself comparing myself to MIsha quite frequently. But unless they made her a katawa-chimera like me, it's not my first guess. Ménières could fit as well. I, at least, have fluctuating hearing loss, including my perception of my own voice, which makes it hard to adapt to, because I don't really know how well I'm hearing it at any particular moment. And dizziness, lack of balance and coördination, that would fit with an inner-ear disorder. But, definitely not serious enough to warrant a special school (although I will say that I wish I had been in such a thing, it would have made my life so much better in so many ways). And anyway, Ménières specifically is incurable, but relatively easy to manage. The only symptom I have that can't easily be treated with medication is the hearing loss, and even that has significantly improved since they started me on medication for it. She could be bipolar, as was mentioned, and trying her best to remain (sickeningly) cheerful to stave off a depressive episode when she's not manic, and when she is manic - well, that's how we act. But I doubt it.

Brain tumor could work, although my understanding is that those typically cause some level of headache, which Misha doesn't seem to exhibit. Not to mention nausea, vomiting... or something. I doubt it would warrant being placed in a special school and not be severe enough to have outwardly noticeable symptoms. There were kids with cancer in the schools I went to, they might be exempt from PE, but they still attended. Of course, there was also at least one stone-deaf student who attended normal classes with an interpreter, so I find it a stretch that Shizune would be there either, but the same could be said for Emi (again, students missing limbs can attend normal school if they have prostheses). Maybe not Rin, not without prostheses, and she's probably too messed up in the head for a normal school anyway. Lily I can understand at least, although again, I saw blind people at normal schools too. As for Hisao, that's been one of the biggest problems I've had with the story since I first saw it - arrhythmia shouldn't require a special school at all. Or even the 24 hour medical staff that they touted. Who makes these decisions as to which students go there? Then again, I did mention a few minutes ago that I would've happily gone to a school where disability was understood/expected, and there was a medical staff on campus - MG makes life difficult. But why aren't there any students in wheelchairs? There should be quadriplegics and such (quads can move their electric wheelchairs via a few different interfaces; some have enough motion in their arms to control a joystick, some use a sip-puff device, et cetera) who need accommodations that the school could provide. And yes, I know I'm overthinking this, and that these stretches are needed for plot, but still. And also, I just went off on a complete tangent. I guess it's just a sine of sleep deprivation - I guess a proper night's rest is integral to functions. I guess the sum of it is that I can't wait for the full version to be released, also, that I need to stop making math puns.
Top

Asperger's Syndrome is not a disability until you're officially diagnosed as mentally retarded, it's either an impairment or a disorder, going by its severity.

Misha doesn't really fit that, anyway.
[19:33] <!Suriko> i think i could go my whole life without putting my mouth on someone's ass voluntarily

As far as I know,there aren't any schools like Yamaku in real life, so most people with the mentioned disabilities would have to attend a regular school.
Emi > Misha > Hanako > Lilly > Rin > Shizune

You can't really be diagnosed with Asperger's and retardation, since one of the criteria is "average to above-average intelligence". But I would wholeheartedly agree that it's not really a disability anyway
Top

NEW THEORY: Misha's disability is that she is actually a vampire, going around drinking people's blood in order to survive. Eventually Hisao discovers this and is forced to kill her, partly so the devs don't have to write a route for her. It's okay though, because she'll get to star in a fighting game spinoff alongside everyone else in the VN, finally getting the screentime she rightly deserves.
Top

I actually never thought about this... In my play through of the game, I never once assumed Misha had a disability. Her loud voice and asking people to repeat things now and again I just attributed to her being a ditzy school girl. I figured that she volunteered to attend the school to help out, or was asked by the school themselves to attend since she knew sign language. For example, a girl I dated back in high school knew sign language because her mother worked with deaf children at schools for a living. She was always asked to lend a hand with events and with students at school and often volunteered herself to do that sort of thing. My assumption was that Misha was from the same area as the school and decided to attend it to help out. Maybe she knew Shizune from a really young age and figured that if she signed for people, they would be able to understand Shizune better and would feel included more with the other students, all the while getting to spend more time with her best friend at school. Misha seems to care about other people a lot (at least to me), and especially her friends, so it fits my perception of her perfectly. It would also look good on a college application, which is another possible reasoning behind it.

Otherwise, if she does have a disability, I would guess its some form of hearing loss. More likely one thats known to develop more over time. It's another explanation for why she would know sign language. It'd be to prepare for the day she finally loses her hearing completely. It also explains the loudness without realizing she's being loud.

Misha is not from the area. She says so in one scene.
Also, I think she mentions how she met Shizune at Yamaku, so they probably didn't know each other beforehand. Can't find the proper quote for the latter on short notice...
Emi > Misha > Hanako > Lilly > Rin > Shizune

Mirage_GSM wrote:Misha is not from the area. She says so in one scene.
Also, I think she mentions how she met Shizune at Yamaku, so they probably didn't know each other beforehand. Can't find the proper quote for the latter on short notice...

Yep, I remember that. It was noted in my 10 minute video discussion on the topic. If I remember correctly it was when Shizune left to get all three of them drinks when they were working on Student Council related stuff when she mentions only recently coming to Yamaku and meeting Shizune. It was when Hisao was first learning about the school festival from them that Misha mentions she is not from the area; thus supporting my foreign or distant Japan location theory.
Rin=Hanako>Emi>Misha>Lilly>Shizune (Misha counts in my world alright; and now she surpassed Lilly)
Fanfic series entitled... A Day in the Life of [character name here] (updated 6/8/10)
Random writings and Crossover... New stuff of Neuman (updated 5/6/11)
It's time to Duel... KS Yugioh Deck (updated 3/16/11)
Top
Post Reply
1051 posts